I also opine on:

Synopsis:
A collection of nine stories based mainly around rural India, with women as central characters

When you are in the presence of a good story, it is the only possible story - no other stories exist in that moment. ("Marrying Nusrat")
Review:

In 2012, I had reviewed A Calendar Too Crowded, and I was so disappointed by the depiction of women as either defensive or sorry figures. It was, therefore, with mixed feelings, that I took up Another Man's Wife.

Bajaj's women are not defensive. They are defiant and strong, with shades of grey. They aren't always right or moral, and that's perfectly alright. I loved every minute and every story of it. The simplicity of the stories, set amongst the most varied of backgrounds and Indian history, made for a riveting read.

Take for example, the first story, "Ripe Mangoes", where the protaganist is sleeping with her daughter's tuition teacher. As the story progresses, we end up loving her, EVEN when she slaps her daughter and says "Stop Snivelling, you little bitch."

Or the story of Ulsha Minj in "the Birthmark", a slave turned wife, who decided not to abort her girl child. Tackling one of the biggest problems for Indian women, this story could have easily been preachy or condemning. It was neither, and much more importantly, the ending was quite unexpected.

Or the story of "Me and Sammy Fernandez", a story of a husband-murderer set amidst a beautiful jazz background in Goa. Again, it's not the story itself that is riveting. It is the way each element is played out - the father who opposes the love marriage initially and becomes the crusader of rights for inter-caste marriages; the man who changes after marriage, and the woman who keep giving herself excuses to stay in it.

Or the story of "Marrying Nusrat" with it's thoughtful little touchers - be it a teenager getting a nickname when he mishears "PRA" as "Pyaare", the struggle of the shift from a village to a city ("To be a poor man in a big city is a terrible thing - the only bodily fluid you can discharge with dignity is sweat") or the background of old hindi songs playing on a transistor in a tea stall.

Or the story of "Under a moonlit sky", which shows the plight of houseboat owners in Srinagar during the terror attacks, something I have frankly not given much thought to (and if I had read this first, I would have been more generous with the "Shikara" owner in Dal lake). While the houseboats resort to desperate means to survive, the once honeymooners of the houseboat are desperate for completely different reasons.

Verdict:
This book is not a sob story. It's the story of women who are fighters, women who have not given up, and are happy with taking their destiny in their own hands. This book is not just about strong women. It's the story of middle class and rural India, who have their own battles to fight.
Its fairly obvious by now, that the book is strongly recommended for a read. At least one of the nine stories is going to resonate with you.
Posted by Archana 1 comments

The Hurons and Turongs lived on the opposite sides of a very temperamental river, Empusa. They weren't very good at farming, but the presence of the moody and ferocious river (very aptly named by the way), and the fact that each side owned 30 acres of land, sort of forced their hand into it.

Come springtime, the two families hired temporary labourers to till the land and sow the seeds. Empusa was fine with it.

....Until one day, when she decided she wasn't.

She unleashed herself on the Hurons in full fury. She overflew her banks, destroyed all the saplings and swept off the soils, ODing on the fertilizers.

Turongs could hear her go, and knew that it would be their turn next.
"Why, it sounds like she is laughing!" They said, with reluctant admiration.
"We have to build a canal and ensure that she stays on the right."
"Yes, she must not turn towards us!"
Thus decided, the Turongs started an elaborate mission of creating a canal.

Four days later, Empusa was relatively calm. She turned and started watching them, laboriously digging and planting the walls.

"What are you doing?" She seemed to ask.
"Trying to one-up you!" Turongs replied.
"So, the canal is to make me turn right?" Empusa asked and snickered.

"What's so funny?"
"Well, everybody knows that Turongs don't make a right!"

She cackled, turned and destroyed their farm in a single swoosh.

Labels: Stories, Time flies, Writing after more than a year

The Sambar is calling!

As a family, we have had a jinx which was turning out to be a hard one to break – the jinx of no holidays. In the last 1.5 years, we planned, paid and cancelled five holidays. Five! It was getting to us, to the extent that we wanted to go on a holiday just to get it over with.

After a lot of planning and replanning, the Tadoba safari finally happened. It was a gamble to go at this time, but happy that it paid off. 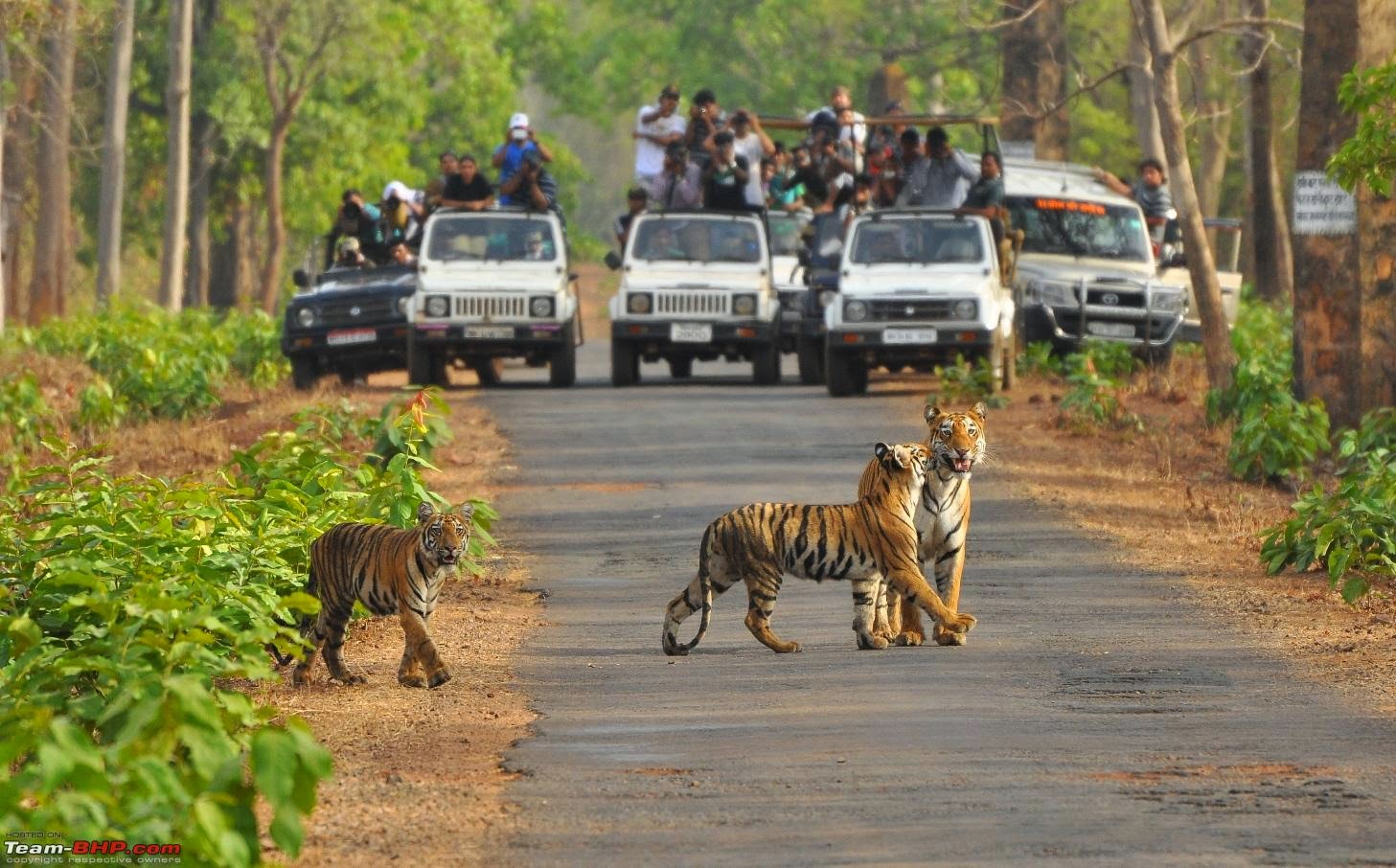 Tadoba Andhari Tiger Reserve is one of the oldest tiger reserves in Maharashtra, and it is to the State Government’s credit that they have stood by their animals. There are no stalls, and no noises within the reserve, except for the ones made by the inhabitants. Though the spotting of a tiger ensures that about 50 odd cameras start clicking simultaneously, trapping every moment, it is all done in a silence so complete, it feel therapeutic.

So, to add on to the latest of fads of e-lists, here are top 5 reasons why one should go to a tiger-reserve: Waiting for our next safari already!!

PS: The photos are sourced from Google Image search and are not taken by me. :)

The intricacies of the side hug

I can do a lot of things - a successful side hug is not one of them.

About five years ago, I evolved from the arms-on-shoulder girl to a bear-hug woman. The sheer joy of giving and receiving so much love in a simple platonic strong-hold is so comforting. But, for the life of me, I cannot master the side-hug. There are a lot of mind-blocks attached to it:


Considering that the Side-Hug is the new Hand Shake, I had resigned myself to accept and practice it.

But then, the inevitable mortifying episode happened. I had to meet the partner of my firm - in a hotel - for dinner (All hints for why I thought this was semi-casual). I come in, and he gets up and says in genuine pleasure, "It's so nice to see you!", with arms wide open. Obviously pleased, I go straight on and hug him.
Turns out, it was meant to be a side hug. For a full 2 seconds, I am awkwardly wrapped around him, and he is trying to bring me to the side.
So, I made a mental note : 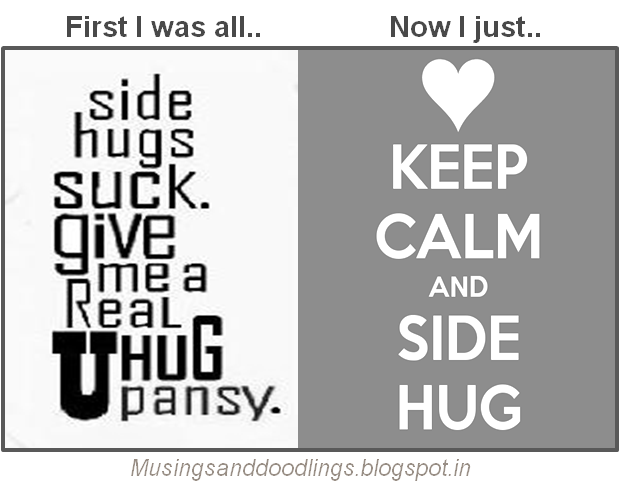 Things were falling into place, when 2 days back, the same thing happened with a colleague of mine. Giraffe that she is, It was really awkward that I was standing on my toes, going all out, while she is wondering what to do.

Seriously, I give up. New rule - Only Side-hugs. Period. If you come and go all frontal on me, I'll go berserk.


I remember one of my friends once mentioning that she is planning to have kids.

She sounded surprised at the question. “Because I am going to be 30! Everyone my age already is a mother.”

“But that really can’t be the criteria for wanting kids.”

“You already are a mother. You don’t know the pressure we go through”.


Hmm. Before I start this post, let’s get a couple of things out of the way:

So, despite being that spoilt, I still warn every wanna-be mothers to think it (it=baby fetish) through. There are very strong reasons for that warning, and I thought of making some charts to explain it (just so, next time I can send a link to this post instead of lecturing the poor souls!):


Things to look forward to while parenting 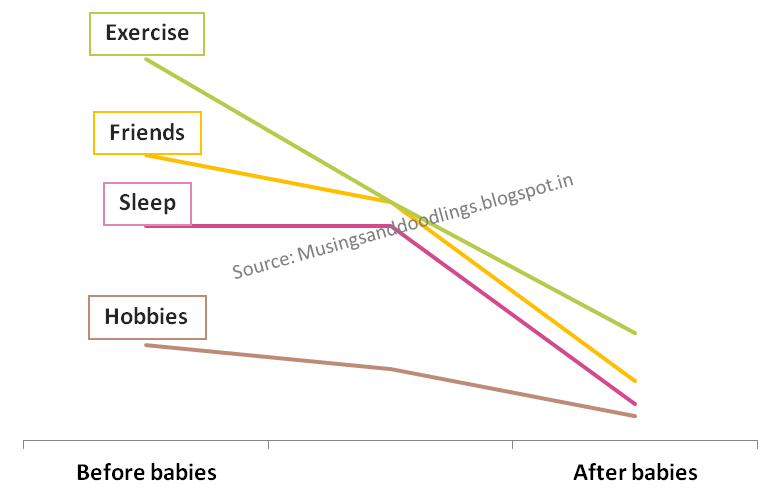 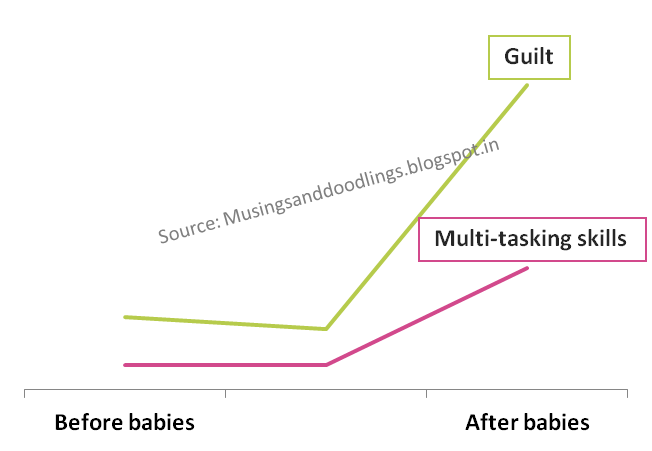 Of course, there are some major perks as well. Your life gets a direction, and you (finally) get some perspective. Specifically, there are two things I could think of


Average energy levels during the day 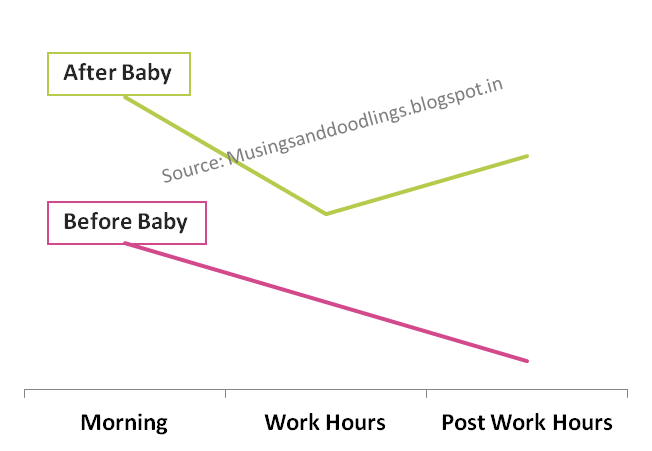 Average Work-Life Balance in a week 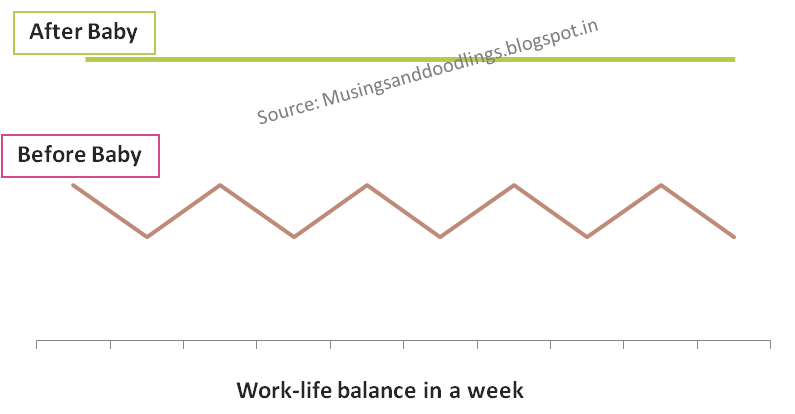 Happy parenting (or non-parenting as the case may be)!